Illinois is known for its iconic, eccentric and historical structures. From Frank Lloyd Wright’s buildings to a plethora of Windy City skyscrapers, to governmental buildings in Springfield and clergy places, the Land of Lincoln is choc-full of man-made beauty.

Opened since 1927 and still going. #waukegan

Lake County is home to some of the quintessential facilities that are must-view buildings. Some are ageless wonders, some are beautiful and gaudy to look at and some are eccentric out-of-place structures that define Lake County.

We may not understand the science behind building a structure, but we can point out cool Lake County architectural gems.

Always wanted to own a castle (I am a king), got the second best by visiting one today! #bettendorfcastle #castle #kingforlife

“Thank you, Mario! But our princess is in another castle!” This Fox River Grove unique facility was built by a Luxembourgian immigrant Ted Bettendorf in 1931. It took three and a half-decade for Bettendorf to build the structure, and it did not disappoint. Unfortunately, Bettendorf didn’t live to see his finished creation as he passed away during the 1960s right before it was completed. The gothic-style castle is a 1.75-acre property inviting groups to tour the grounds and host wedding ceremonies, photo sessions, princess parties and much more.

Explore Cairo, Lake County…or Wadsworth, and see authentic Egyptian artifacts at the Gold Pyramid House. The eight-story Lake County structure is an actual pyramid alongside the I-94 Tri-State Highway. The Wadsworth pyramid offers tours, a King Tut tomb replica and drinks from their legendary water that is also utilized for their vodka at Club Tiki in Waukegan. Unfortunately, a few years back, the house had a massive fire. However, they’ve opened their doors back up as of 2022. The Gold Pyramid House is hosting car shows, tours, private events and concerts. Like the phoenix, this structure has returned to its prestigious vibe – now donning black armor.

Super fun day date with my best buddy! He even won the golden coin. 🏌️‍♀️ 🏌️

Sure, you can’t necessarily walk into any of these structures, but the themes of these iconic architectural gems are a sight to see. If you question your adult linkability when the shelter in place expires, challenge your closest adversary to a putt-off for bragging rights at Par-King Miniature Golf in Lincolnshire. The world’s most unusual course has received accolades from the Travel Channel, Daily Herald, Golf Digest, the Chicago Sun-Times, USA Today and more.

“Shiloh House is a 25 room mansion built in 1901 as the residence of Zion’s founder. The residence of the founder of the City of Zion, Dr. John Alexander Dowie, is a stately 25-room mansion that was built in 1901-02 and is listed on the National Register of Historic Places.” https://www.enjoyillinois.com/explore/listing/shiloh-house-1 ——- #archi_ologie #oldhouselove #shiloh #shliohhouse #zion #zionil #zionillinois #historicalsociety #housemuseum

The once clergyman Alexander Dowie’s house, the 25-room mansion is always dressed to kill. Shiloh House is all decorated for the holidays and is open for self-guided tours. You can also visit on select days to sip a spot of tea with the squad. Admission is free, but donations are accepted.

For an exceptionally unique occasion, Cuneo Mansion in Vernon Hills is open for weekend tours and private functions of up to 300. Initially owned by the Founder of the General Electric Company Sam Insull, the lavish home is designed with an Italianate style complemented by scenic gardens and landscaping. The house was later bought by Hawthorn Mellody Farms Dairy, National Tea Company and Cuneo Press owner John Cuneo Sr. in 1937. After the shelter in place ends, go for a tour, or plan your wedding to be hosted at the venue. The home was also featured in “My Best Friend’s Wedding” starring Julia Roberts.

What’s behind that door?

This 1837 erected home is one of Illinois’s eldest structures and the oldest building in Lake County. Located in Deerfield’s Historic Village, the Ott cabin, a three-room log cabin, and a farmhouse are original structures moved from locations in Deerfield. The historical society built the 19th-century one-room schoolhouse and a carriage barn to complete the village, but the Ott home is the centerpiece and the pride of Lake County.

Yep. A giant, rebuilt and fully restored French Carousel inside an astounding museum. Thanks Hedeker Wealth for the fabulous treat. A wonderful time yesterday.

A post shared by Michelle Damico Communications (@michelledamico) on Oct 31, 2018 at 8:32pm PDT

The Barrington Hills Mansion is filled with mechanical oddities. The luxurious private home is an eclectic facility comprised of a collection of antique music machines, steam engines and other really cool things you didn’t think existed. The estate hosts select events throughout the year. The Sanfilippo Estate also has a concert hall in Second Empire-style that sits on 64,000 square feet. You must see one of the world’s largest Wurlitzer organ that plays automatic scores and orchestrations as well as can be performed by musicians. In various barns on his property, he kept antique locomotives, circus carousels, slot machines, penny arcades, 1920s-era Rolls-Royces and tower bells from old Chicago churches.

Waukegan Harbor Lighthouse, Waukegan, Illinois, August 2019⠀ Note: You have to buy a $10 beach permit if you are not a resident of Waukegan to see this. I wasn’t happy about that.⠀ #lighthouses #lighthouse #lighthouse_lovers #lighthouselove

This historic landmark was first built in 1889. The iron tower we all know and love today was once connected to a house. However, in 1967 the house succumbed to a fire, which was severely damaged. However, the iron-clad tower didn’t have any significant problems, but the light and the fog signal were all destroyed. Since then, the pier has been extended, and it still maintains an active light. The lighthouse is now owned and maintained by the U.S. Coast Guard. It has stood in Waukegan as a fixture for over 120 years.

Ansel B. Cook House in Libertyville 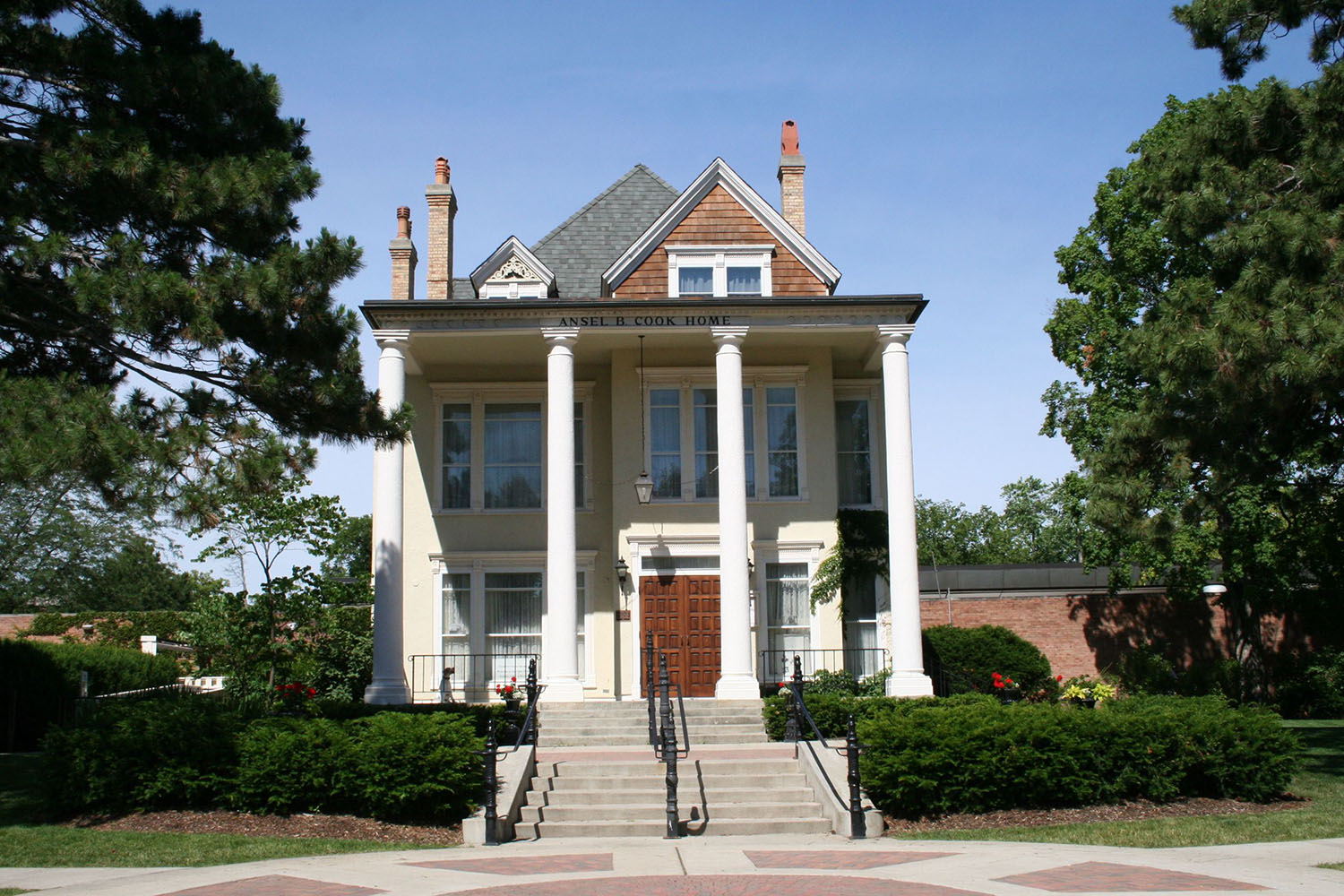 On the list as one of Lake County’s National Register of Historic Places, was built in 1878. The Cook House is the centerpiece of downtown Libertyville. The Victorian home is now a museum open throughout the summer. MainStreet Libertyville hosts a slew of annual events in the home’s front yards.

Good morning from the Quarterdeck of the #USNavy.

Naval Station Great Lakes is home to the United States Navy’s only boot camp located in North Chicago. When these naval recruits step onto the base, they live by the credo “Non sibi sed patriae” or “Not for self but for country.” Not only is this area home to one of the eldest military facilities in the country, but it’s also home to the National Museum of the American Sailor. When you think of the Naval Station Great Lakes facility, you think of the 300-foot clock tower, also known as Building One. The landmark was created in 1911, made of red brick, and has a tower over the third floor of the building.

Once a post of the U.S. Army Post named after Civil War Cavalry General Philip Sheridan, the defunct fort in Highland Park, Highwood and Lake Forest has been closed since 1993. During the 2018 Illinois Bicentennial, Fort Sheridan was selected as one of the Illinois 200 Places by the American Institute of Architects. The army fort was maintained for over 100 years, as it opened in the late 1800s. The Fort Sheridan District is on the U.S. National Register of Historic Places and is a U.S. National Historic Landmark.

As the oldest restaurant/drinking hole in Illinois (and probably in the top 10 eldest in the U.S.), The Village Tavern has been in continuous operation since 1849. In a classic roadhouse fashion, this family-owned restaurant has been a favorite watering hole in Lake County for generations. A spacious dining room and antique bar area preserve the establishment’s rustic authenticity. Especially popular is the massive 35-foot mahogany bar, which survived Chicago’s ‘Great McCormick Place Fire’ in the 1960s. This classic restaurant’s warm and friendly ‘pub’ atmosphere attracts locals and tourists alike. There is live entertainment six nights a week. The 19th-century eatery is known for its excellent steaks, half-pound Angus beef hamburgers, hearty sandwiches, broasted chicken and fish fry. You have to try their prime rib as well on Saturday nights. There are so many historical nuggets in this Long Grove mainstay; watch the video above to learn more.

University of Saint Mary of the Lake in Mundelein

University of St. Mary of the Lake

USML is the quintessential nature haven. The variety of tree species complemented by the serene lake makes for a year-round photo op. The Mundelein seminary is known for its pristine building and its unbelievable library. The Illinois General Assembly is the longest continuous academic charter in the Land of Lincoln.

A short drive away, you can visit Adlai E. Stevenson’s historic home in Libertyville

“A hungry man is not a free man,” said the late former Governor of Illinois and U.S. Ambassador to the United Nations, Adlai Stevenson II. The American lawmaker resided in Libertyville (now in present-day Mettawa). Tour his home now operated by the Lake County Forest Preserve District, and get an up-close-and-personal look at “the man from Libertyville.” Visitors will learn of the speeches he wrote, his ideology of the world and his livelihood in the Lake County estate. The National Historic Landmark tour runs throughout the year on select days.

A post shared by Wandering Tree Estate (@wanderingtreeestate) on Aug 1, 2018 at 1:41pm PDT